"The Virtues – Towards a New Courtesy!" Introduction to the 2013 Exhibition in Amsterdam Town Hall 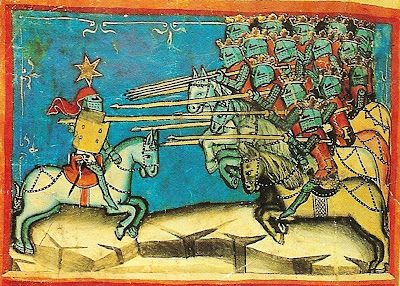 Here in the hall of Empire City Amsterdam – Austrian Emperor Maxmillian granted the Dutch capital in 1489 the right to bear the Imperial crown on its coat-of-arms with the current motto Valiant, Steadfast and Compassionate added by Queen Wilhelmina in 1946 – it marks the first time that all 12 contemplations from the The Virtues – Seasons of the Soul by Herbert Witzenmann (in English and Dutch) are exhibited together with the 13 accompanying illuminations by Jan de Kok. During the formal opening and Vernissage on April 5, a completely revised (Dutch) edition of The Virtues will be presented (a new English edition has in the meantime also appeared).

In his opening remarks, the publisher Robert J. Kelder will make a historic connection between the theme of the exhibition and the medieval founding father of the House of Orange, the legendary Willehalm (see image), who, based on his outstanding embodiment of the knightly virtues of courage, justice and loyalty, was in 1066 declared Patron Saint of the Knights, and after whom the Foundation solely responsible for this exhibition is named.

This connection will be further elaborated on in two talks on April 26 and May 3, leading to a well-grounded petition to our new King William-Alexander, who as such will on April 30 also become the new Grand Master of the Military William Order of the Sword that is also named after this first valiant William of Orange. This petition entails a request to install a supplementary Civil Chivalric Order of the Word with the noble aim of giving rise to a Movement for a New Courtesy through the embodiment of the 12 Virtues portrayed here as a counterpoise to the ever increasing ruffianship and worse in our Kingdom and beyond.

The exhibition, which will be open to the public from April 3 to May 10 on weekdays from 7 AM to 6 PM, is a free contribution to the project “Courtesy of Amsterdam” initiated by Municipal executive councilor Andrée van Es in 2011. Its subtitle Towards a New Courtesy is taken from the Virtue of the month September that begins with “The compassion that becomes freedom restores to courtesy its meaning and dignity.” and that ends with “Thus courtesy becomes tact of the heart”.

H.P. Blavatsky and Rudolf Steiner
The 12 meditative texts on display here stem reportedly from Madam Blavatsky, one of the founders of the Theosophical Society, who attributed a Virtue to each month, e.g. May: perseverance. Afterwards Rudolf Steiner, the principal founder of the Anthroposophical Society, set them in motion: Perseverance becomes faithfulness. Subsequently it was the German philosopher Herbert Witzenmann (1905-1988), a personal student of Rudolf Steiner, who explicated the conceptional movement between the thus conjoined Virtues, For this he wrote a magical-idealistic introduction “On the Genesis of the Virtues” as well as an apologetic-philosophical epilogue “Primer for the Adoption of the Virtues”. He also indicated the sources from the spiritual treasures of mankind for the mantras with which each of the 12 Virtues as spirits of movement end

Jan de Kok
Concerning his illuminations, the Dutch painter Jan de Kok, who views Maarten Krabbé and Jan Sierhuis as his teachers, wrote the following, “In the portrayal of The Virtues I allowed myself to be led by nature, nature in which often invisible forces are active in connection with the whole cosmos. This I expressed in pure colour power that finally flows out in form power. Colour after all precedes form. Those are the forces that make nature grow. In connection with the image and the text from this booklet, it can come to pass that the spiritual world becomes a reality that one undergoes as a meditative experience. The colour experiences in our soul play an important role in each month. When we connect ourselves with that, this can in the here and now take on a succinct form. A conscious awareness of ourselves and nature around us, may lead us to better understand the whole, the interconnectedness.

Willehalm Order of Knights
The historical motivation for the request to install a Willehalm Chivalric Order of the Word to our new king, who according to article 75 of our constitution is the only one entrusted with the power to do so, is based on the scholarly research report How the Grail Sites Were Found –Wolfram von Eschenbach and the Reality of the Grail by the Swiss anthroposophist Werner Greub that was published by the Willehalm Foundation in 1999. From this, it appears that after his military career as the supreme commander of the Carolingian army in defense of the Spanish mark, this William with the Horn played a crucial role in the events leading up to the wonderful coronation of Parzival as King of the Grail as well as its oral tradition to posterity. Under the title The Virtues, William of Orange and the New Kingship this will be elaborated on during the talks in City Hall as “Dream for our Country”, inspiration for the future activities of our new king and queen.
Robert Jan Kelder
Willehalm Foundation,
Amsterdam, April 3, 2013
For more information on the petition to King William-Alexander: www.willehalm.nl; http://Willehalm-Order-of-Knights.blogspot.nl
Posted by Willehalm at 11:32 PM 3 comments:

Charter of Humanity - The Principles of the General Anthroposophical Society